Time passes, and I feel a need to catch up with an old familiar friend. Ursula K. Le Guin (1929-2018) passed on the 22nd. I can’t quite recall if I first met Rocannon’s World or A Wizard of Earthsea, though good money would bet on the latter. I imagined I had some other True Name, which seems the fantasy of a young boy. I almost wish I’d kept a diary of what I’d read when, as if these details matter.

There was this sense in many SF stories of the imminent possibility of a technological utopia, of the Teutonic cleanliness of Werner von Braun‘s space station as drawn by Chesley Bonestell or Walt Disney’s Tomorrowland, if only some minor barriers were removed. But in Le Guin’s work there was always a seed of doubt, the shadow of consequences, most starkly perhaps in “The Ones Who Walk Away from Omelas.” So it was that when I found myself reading her The Dispossessed (1974) after Robert A. Heinlein’s The Moon is a Harsh Mistress (1966), an anarchic world seemed realistic, possible, and desirable. One could be comfortable with uncertainty, and with ambiguity. 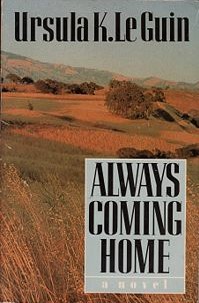 1985 was a good year for the apocalypse, what with the Cold War not igniting. But that didn’t stop books like A Canticle for Leibowitz (1960) and The Postman (1985) from making an impression. I suppose it was not an accident that I spent almost as much time with Always Coming Home (1985) as I did browsing The Whole Earth Catalog. Luckily the library was generous, and did not mind that I kept renewing the book so I could read it again and listen to the tape. Probably it helped that I didn’t break the spine, or perhaps no one else knew it was there. However it happened, I’m glad. There was hope in it.

When I rearranged some things the other day, I found the December 1994 issue of Fantasy & Science Fiction, featuring “Solitude,” by one Ursula K. Le Guin. Judging from the cover art it must be current; I’ve seen my children in that same posture.

I have only a handful of her works in my collection. Some have left over the years. Mostly it was the public libraries which were responsible for keeping us in touch: My only interaction with Ursula Le Guin was with her words. It’s fitting that she left those behind. I think I’ll go read some now.

I’ve been reading stories from the November/December 2017 issue of Asimov’s Science Fiction magazine that I picked up at Barnes & Noble before Christmas. They seem so immediate. The first I read, “I Met a Traveler in an Antique Land,” by Connie Willis, was a pleasant tale of a new media guru encountering an archive of vanished books. It brought to mind the contrary impulse, regarding the second book of Aristole’s Poetics, in Umberto Eco’s The Name of the Rose. The second, “The Discrete Charm of the Turing Machine,” by Greg Egan, about replacement of people by computers, was more difficult. Because everyone’s only purpose is a job. Not work to do something, not to create anything, not to solve curious puzzles, but a job to be employed by at the will of a mysterious Other, doing things that perhaps shouldn’t be done, occupation for idle hands, without meaning, only for money. Because without money we can’t buy; we can’t live.

Exploring this relationship between man and his work, between humanity and its creations, has been a common thread of inquiry for a long time now: Daedalus and Icarus; Frankenstein; R.U.R.; I, Robot; The Silver Metal Lover.

I did finish the story. The solution it suggests is only slightly better than the Matrix.

If not careful, the brogrammers responsible for the attention deficit economy and big data collection will find their work has gone the way of interactive television. People use tools because they are — wait for it — useful.

You’re not the customer; you’re the product.

A web browser keeps, or kept, a history of where the user has browsed, what sites he’s visited, pages he’s read, where he’s been. It uses this information in the back button, but it’s also exposed as a list. The user can, more generally, retrace his steps. Additional windows and tabs in the browser interface led to discontinuities in the history, so while browsers still send referrers, they are, for the most part, lost to the user.

As my habits have shifted from a desktop to a pocket computer, I’ve noticed a key missing feature. Where has view source gone? And with my time being spent in specialized “apps” that are really just handicapped web browsers, an annoying behavior of iPhone memory management has me poking around Medium‘s and The Guardian‘s apps for something that should be there but isn’t: my reading history.

iOS has made what I consider odd design decisions, some of which have bled over to MacOS. (And speaking of questionable design decisions, that lowercase m I just didn’t use.) It assumes a well-connected network, values currency, and behaves as though local memory, storage, and power are tightly constrained. (The latter is a hoot considering how many years location services — and valuing currency — have been draining batteries.) In practice this means that if you leave an app for a minutes or seconds, say to check an incoming text, the app throws away its state and you lose your place.

Started that long think-piece on Medium on something dreadfully pressing, but it’s time to make dinner so you’ll get back to it later, where later is tomorrow or next week because life is like that? In the middle of cooking a new dish and scrolling along through a recipe as you add ingredients, then your mother calls, the page reloads, and now you’re confronted with adding another tablespoon of ghost pepper or none at all? That YouTube video you were meaning to finish watching later? Yeah, it’s disappeared. But, well, at least you can look for it in the vast store of clicks that Google has on you: you can see what was captured.

Safari will reveal your history. But Medium doesn’t. Facebook doesn’t. Twitter doesn’t. Other apps don’t. They haven’t been that considerate. It’s pretty obvious all these folks know exactly what I’m reading and watching and listening to, when, and for how long. They use that data to serve up recommended fodder, advertisements for my attention. But there’s no courtesy of a reach-around. No trail of breadcrumbs for me to follow back out of this dungeon to what led me here in the first place.

If you want to continue the data harvest, it’s necessary to feed the cattle.

Walking back from the bus stop, No. 2 Son, who is only just 10, looked thoughtful. A few steps later, he remarked, “School is slavery.”

“You are ripped away from your family.”

“But at the end of the school day you come home.”

He turned to his friends who were walking alongside: “School is like prison.”

“You are forced to go there and you cannot leave.”

This work is licensed under a Creative Commons Attribution-NonCommercial-NoDerivatives 4.0 International License.